While Egypt and Israel acted to cool the crisis in relations sparked by last Friday’s mob attack on the Israeli embassy, Turkish Prime Minister Tayyip Erdogan threatened another inflammatory speech against Israel during his Monday visit, Sept. 12 – this one from Tahrir Square in a bid to buy the popularity of the Arab street. Jerusalem and Washington are concerned that it will have the effect of stirring up anti-Israel riots in Egypt and Jordan, Israel’ second peace partner, as well as encouraging the Palestinian terrorist Jihad Islami lurking in Sinai to proceed with its threatened cross-border attack.

“My head had a very deep cut. The doctor ‘treated’ me for the cameras, but all he really did was wipe the blood off my forehead. I had an open skull wound which he didn’t even touch.”

When the soldier was hospitalized in Israel, he was diagnosed with a fractured skull which also required 14 stitches.

”The mob kept pointing at me and yelling ‘Gilad Shalit,’ and they were very happy that an Israeli soldier had been captured… Later the PA system came on and we could hear the captain saying that the ship had been taken over by the soldiers.”

Commando “B” testified, “I resisted as best I could but without success. I remember they kept screaming, their eyes were insane and full of hate, and I knew it was the end and they were going to kill me…”

“I saw that there was massive bleeding and I could see my intestines spilling out of my stomach… While they were dragging me down the ladder I saw soldier “C” lying on the bottom deck with men acting crazy all around him, they kept beating him without stopping.”

“They tried to strangle me and soldier “C” and you could see the hate burning in their eyes. They told us in English that they were going to kill us. Apparently what kept them from doing it was that there were people who wouldn’t let them and pushed them away.“ 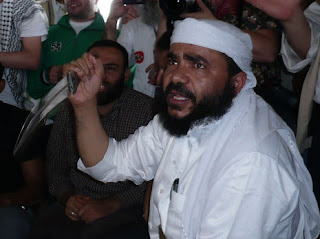